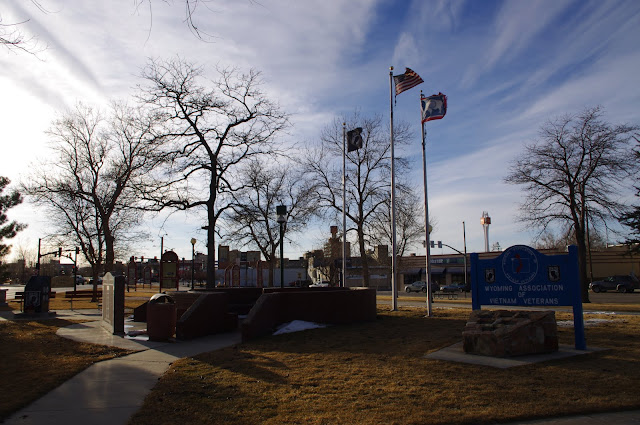 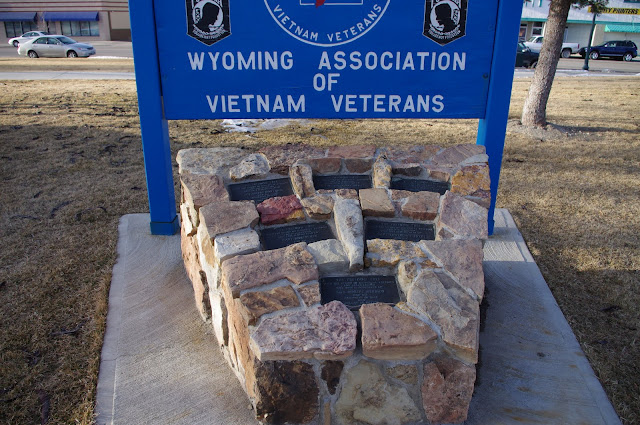 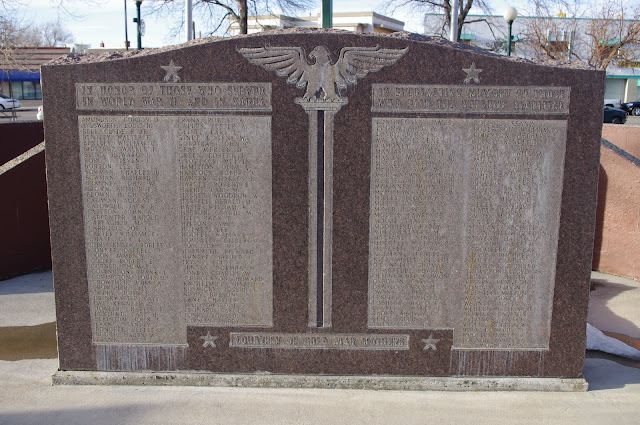 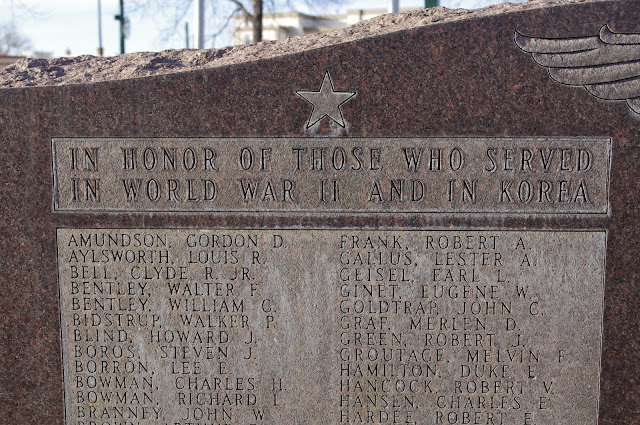 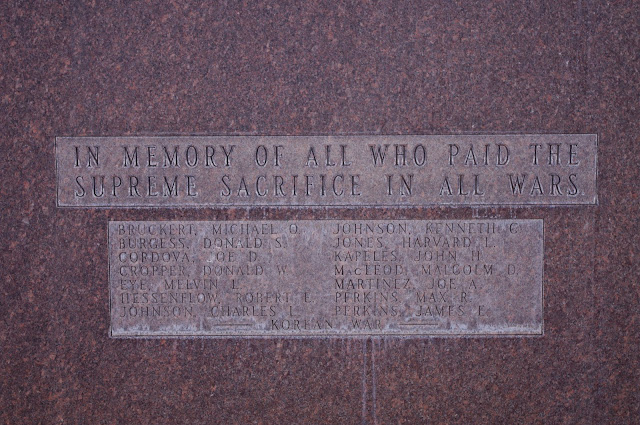 The memorial depicted above was originally across the street from City Park. It was removed to Veterans Park when a controversy about a Ten Commandments display, long in the park, brewed up due to outside agitators. At that time, the city, taking a look at the various memorials it had here and there, decided to consolidate them in the remodeled park.

This particular memorial contains an odd error in it in that a name on the memorial for a Korean War Marine is there in error. That particular individual was late in reporting back from a patrol late war, and listed as MIA. The creators of the memorial later presumed that he had died, and he was listed on the memorial, even though he did not die in the war, and may still be living. 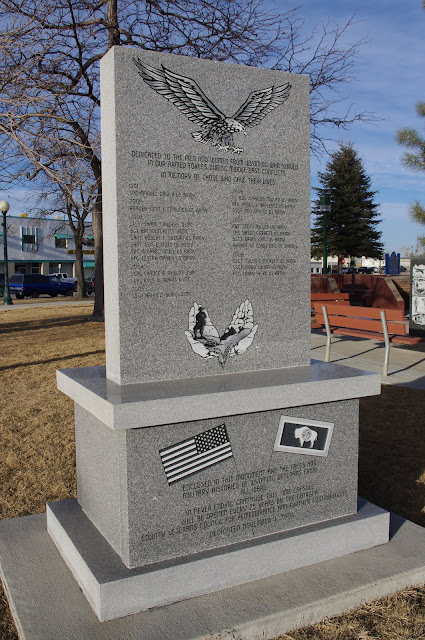 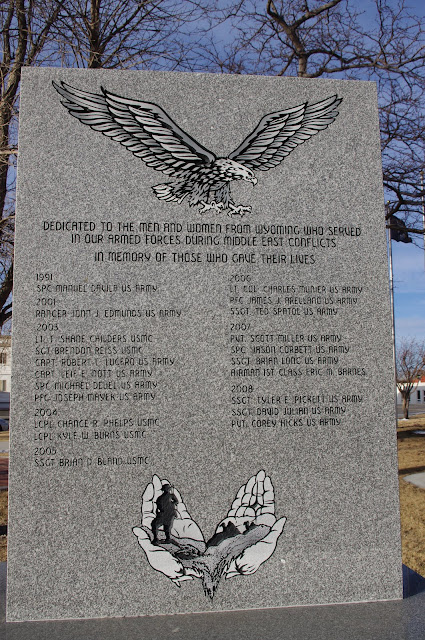 This stone monument commemorates those who have died in the Middle Eastern and Central Asian Wars that have been fought since 1990. 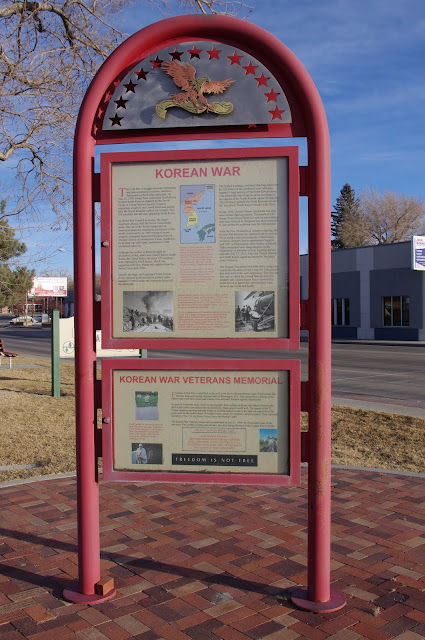 Sign discussing the Korean War. Signs are present in the park for every widely recognized war fought by the United States since the Civil War. 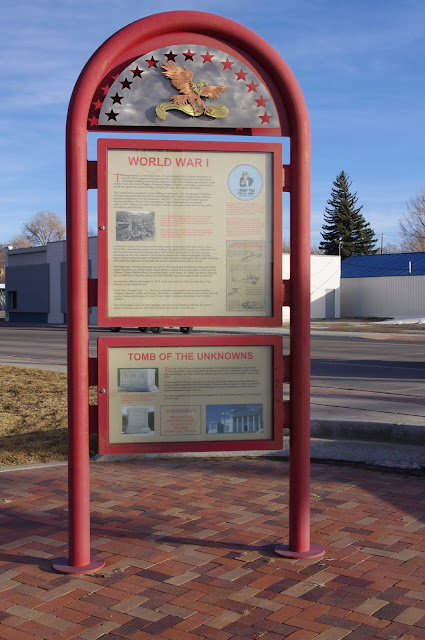 This is the sign for World War One. This particular sign is unfortunately incomplete in terms of its information, as the sign maker was apparently unaware of the role of the Wyoming National Guard in the war. If you read the sign, you would be left with the impression that the Guard had little or no role, when in fact it was called up prior to the war for the Mexican border crisis, and it served as heavy artillery during World War One. 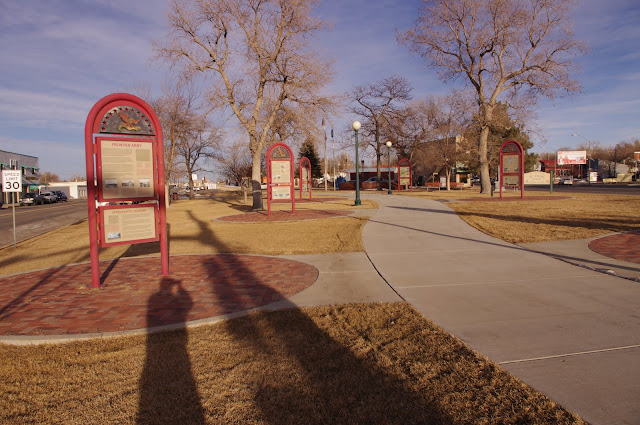 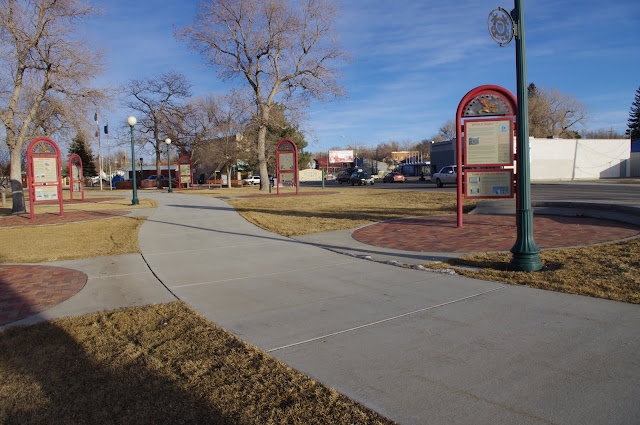 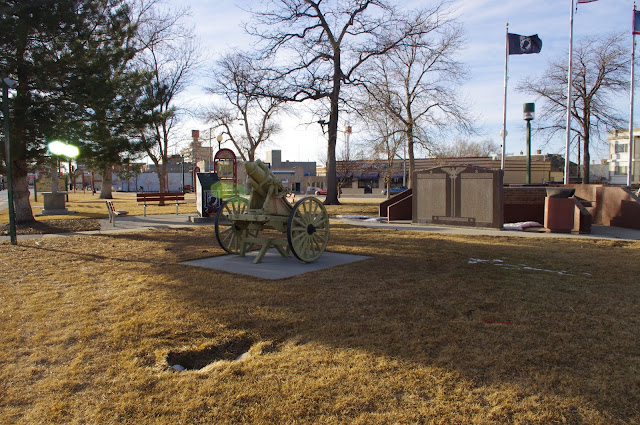 A World War One trench mortar is on display at the park.
Posted by Pat, Marcus & Alexis at 5:32 AM

Some Gave All is one of a series of our blogs which are basically photographic in nature. The main blog, the "hub", is Holscher's Hub, which is a general photo site. The general blog that we have that receives the most viewing attention is Lex Anteinternet, which started off, and which also remains, a blog for the study of historical topics of the 1890-1920 time frame, but which also deals with about everything else. Our daily Wyoming history blog is Today In Wyoming's History.

We also have four specific photograph blogs with dedicated topics, those being Churches of the West, Courthouses of the West, Railhead and Painted Bricks. Those blogs are dedicated to photographs of the topics their title indicates (more or less). This blog, while a history minded one, fits into the latter category. It depicts monuments, mostly war memorials, that we've run across in our travels.

Many of these photos, indeed probably all of them, were taken as the opportunity arose. It'd be rare here to find a photo in which we had gone out specifically to photograph the memorial. Because of that, they will not have a professional quality, as we have to take the monument, including the light, weather, and other conditions, as we find them. Still, that serves the purpose, which is to record monuments and memorials that otherwise would likely be missed by most people.

All Time Most Popular Posts

Trending Posts of the Week

Other Blogs of Interest

Pat, Marcus & Alexis
We are father, son and daughter, all native to Casper Wyoming. All of us are interested in history and photography. Our websites seeks to record a bit of that history, and that of our region. The photo depicted at the top of our Painted Bricks site and our Courthouses of the West sites are credited to Wyoming Tales and Trails, whose website can be found at: http://www.wyomingtalesandtrails.com/index.html